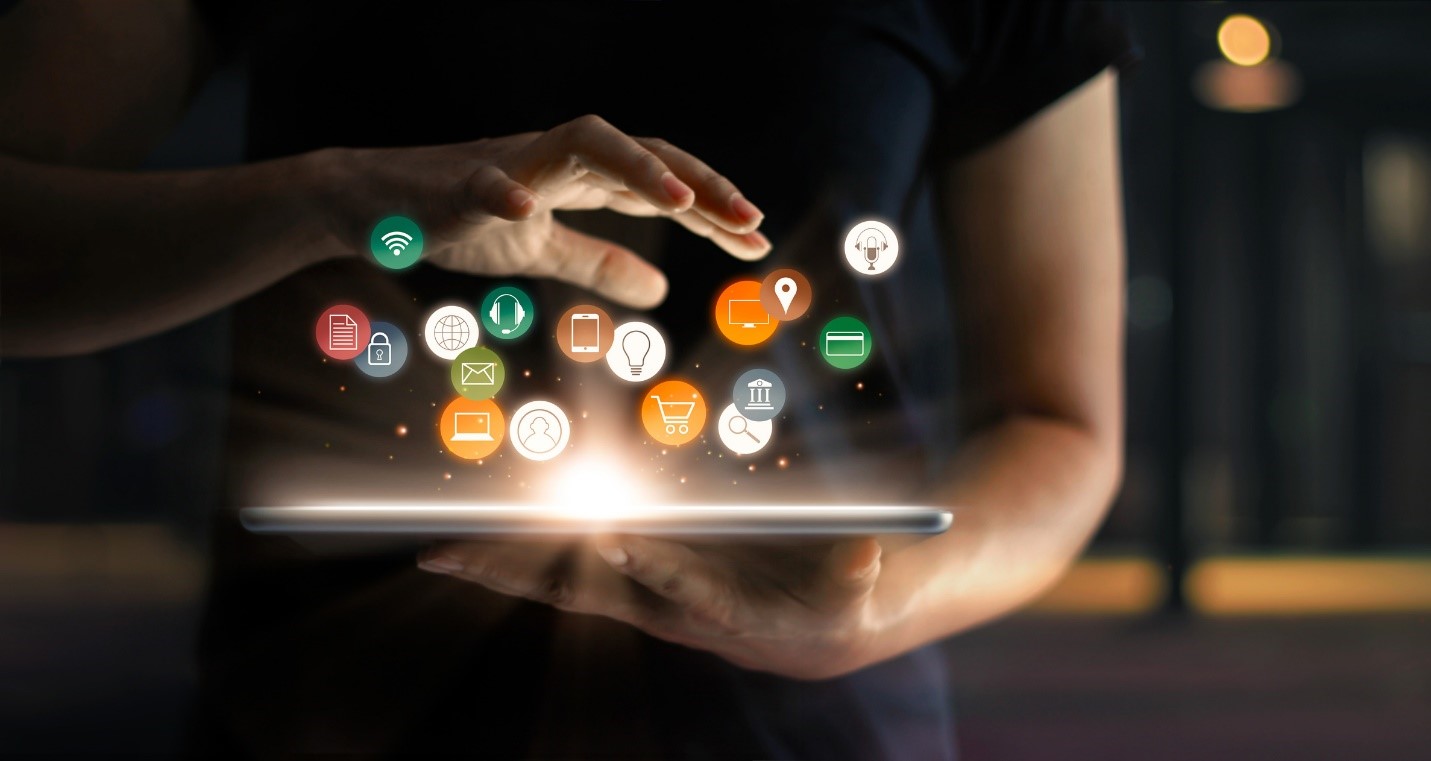 You likely open several more apps before the order is fulfilled and recorded. Then, you have to do it all over again for your other orders. These are the consequences of running an eCommerce business.

Thanks to Zapier and Zapier alternatives, though, the process does not have to be so tedious and time-consuming.

These platforms automate repetitive processes by forging clever connections between normally separate apps. The results have proven liberating for many internet-based merchants.

If spending less time on busy work sounds appealing to you, then a good software integration platform can transform your life as well. In this article, we provide some information on Zapier, the most famous of them all. Moreover, we also highlight some of the best Zapier alternatives on the market, which may be better at meeting your business’s specific needs.

The Advantages of Zapier

If you did any research into software integration and app automation before opening this article, you almost certainly read the name “Zapier” somewhere. The platform seems firmly established as the most well-known and well-regarded in its field. We’ve even gushed over the power of Zapier integrations in past blog posts.

For those who are not in the know, Zapier strives to keep it simple. Instead of asking customers to customize code, they offer a variety of readymade connections between over 3000 apps. Each of these “workflows” consists of a “trigger” and at least one “action.” When an inciting incident pulls the trigger on one app, it causes another app to take a specific action.

Most apps, especially the more popular ones, can interact with others in many useful ways through this platform. You can even string several actions together, allowing for cause-and-effect chains that automate large swaths of busywork. Clever implementation of triggers and actions would open up more time, which you can spend on tasks that require more thought and creativity.

With that said, Zapier may still not be ideal for every merchant. For all its much-touted ease of use, the learning curve may still throw off less tech-savvy users. Pricing can be the biggest obstacle: the free plan only allows up to five zaps and doesn’t even permit multi-step workflows. You’d need to upgrade to the $49/mo tier for unlimited integration and Zapier’s other useful features. Worse, the apps you want to connect may be available, but not the trigger/action combination you need.

If these and other disadvantages leave you hesitant to sign up with Zapier, don’t worry: it’s not the only platform of its kind. Plenty of programmers and companies designed their own Zapier alternatives, each with its own distinct approach to software integration. One of these platforms may take exactly the approach that you and your business need. We’ll break down a few of them here, so you can make a more educated decision.

Automate.io is among the most widely praised of Zapier alternatives — which is curious, because it seemingly falls short of its rival in a few ways. Even their priciest plan doesn’t come with unlimited integrations, and just over 200 apps are available. However, not everyone needs access to every app in the known universe, nor does everyone need more than a certain number of integrations each month.

If that sounds like faint praise, consider this: Automate.io hews closely to its competitor’s approach, but at a more affordable cost. You can set up multi-step actions with additional timing and conditional features, making for more robust automation. It’s even less complex to arrange than Zapier. If you don’t want to shell out $49/mo for software integration anyway, it’s by far the better deal. 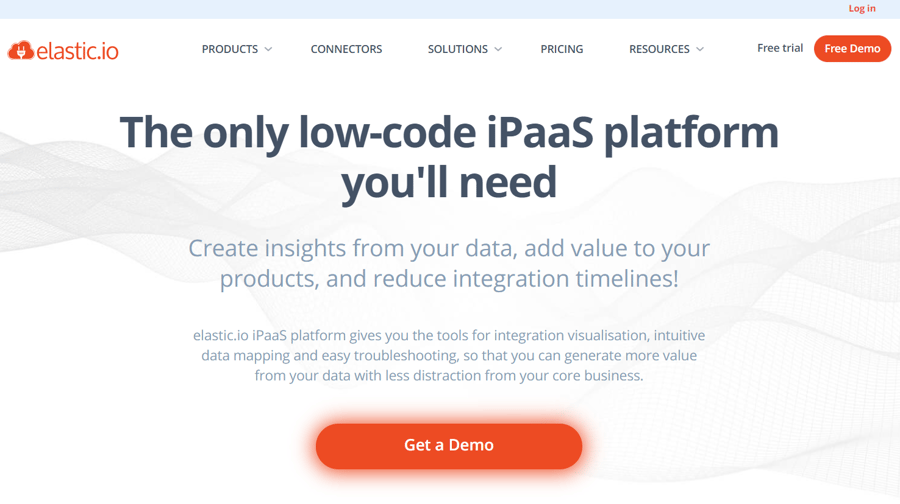 Elastic.io is not the ideal choice for mom-and-pop shops and solo entrepreneurs. It’s expensive, even without taking the Euro to USD conversion rate into account. It’s also much more complex than Zapier and similar platforms. Instead of simply giving you a select list of apps and associated functions, it also provides the power to connect a variety of systems.

As the name implies, elasticity is the platform’s key asset. Flows can be coded for greater complexity, and flaws are easy to fix thanks to the user-friendly interface. Data is easier to analyze and share. Just about any app with open API access, both cloud-based and on-premises, can be integrated. Bigger companies with their own team of programmers can work wonders with elastic.io. 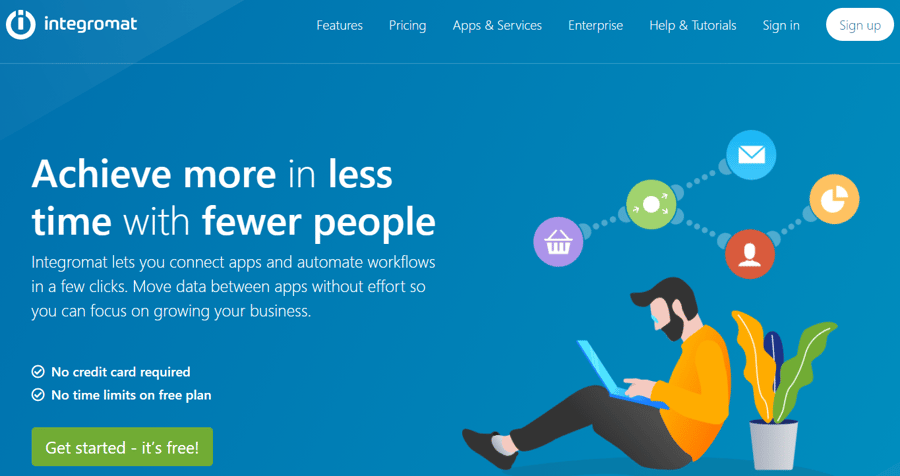 Integromat is another of the most well-regarded Zapier alternatives in the field. The platform enables connections between over 950 apps, and the company promises that this already impressive selection grows every day. You can also add any API to your workflows, which can be simple or highly complex. The engine is powerful, the analytics are detailed, and its use of Excel-like functions can come in handy.

The true draw, though, is the visual editor. Integromat may have the clearest and user-friendliest one of them all. Users are able to see the details of each app’s operations in each workflow with a single click. They’re also able to see the bigger picture in easy-to-read layouts. Elaborate chains of triggers and actions are a breeze to arrange, especially when compared to other platforms.

Pricing: A free plan is available. Anyone interested in more features and functionality may want the Basic ($9/mo), Standard ($29/mo), Business ($99/mo), or Platinum ($299/mo) plan. Anyone who wants more can check out the Enterprise solution or request a custom plan.

Over 380 integrations may seem slim compared to other software integration platforms. Don’t be fooled: LeadsBridge hand-picked its selection with a specific purpose in mind. Unlike the previous platforms on this list, this one has a focus — namely, facilitating connections, automation, and synchronization between marketing and advertising apps.

eCommerce business owners are all too aware that promoting one’s online store is both imperative and tedious. The software integration capabilities of LeadBridges can eliminate much of that tedium. You can use it to automate email marketing, campaign management, lead generation, and more. Spreading the word and winning over potential customers becomes much simpler and more efficient.

Workato is the platform of choice for gigantic companies and organizations. HP, Sony, AT&T, MGM, Slack, Zillow, and the American Heart Association are just a few of its more famous clients. Unfortunately, that’s partly because only gigantic companies can really afford it. This platform is easily the most expensive on this list.

On the plus side, those who pay for it will get their money’s worth. Unlike many other Zapier alternatives, this one imposes no limits on the number of connections and workflows (here called “recipes”) you can make. The company takes automation so seriously that it even uses some artificial intelligence to optimize the process. It’s all topped off with a user-friendly interface. If you can afford it, Workato is hard to beat.

Pricing: The Pricing page on Workato’s website only gives the option to request a quote. Reviews on other sites report that business plans start at $10,000/yr. It’s safe to say that Workato’s services are reserved for big businesses working to get bigger.

IFTTT stands for “If This, Then That,” which is the driving idea behind this playful platform. They provide unlimited access to a remarkable array of premade workflows, which they nickname “applets.” Users can also create their own from a surprising and atypical selection of apps. IFTTT users could, if they’re inclined, trigger a Philips smart light to blink on with each new order they receive.

IFTTT’s interest in simplicity doesn’t allow for more intricate workflows. That aside, it can still be great for serious businesspersons. The learning curve is almost nonexistent, and the applets cover most of the ideas you may already have. It’s also much more affordable than certain other platforms on this list, especially for all the connections and potential it provides.

Pricing: The $3.33/mo Pro plan is labeled as being for individuals, but businesses can try their luck. Then again, there may be no need: the Developer plan runs at a refreshingly affordable $199/yr. The Team plan’s monthly costs are dependent on the number of “connected users.” An Enterprise option is available, as is a free yet limited Standard option. 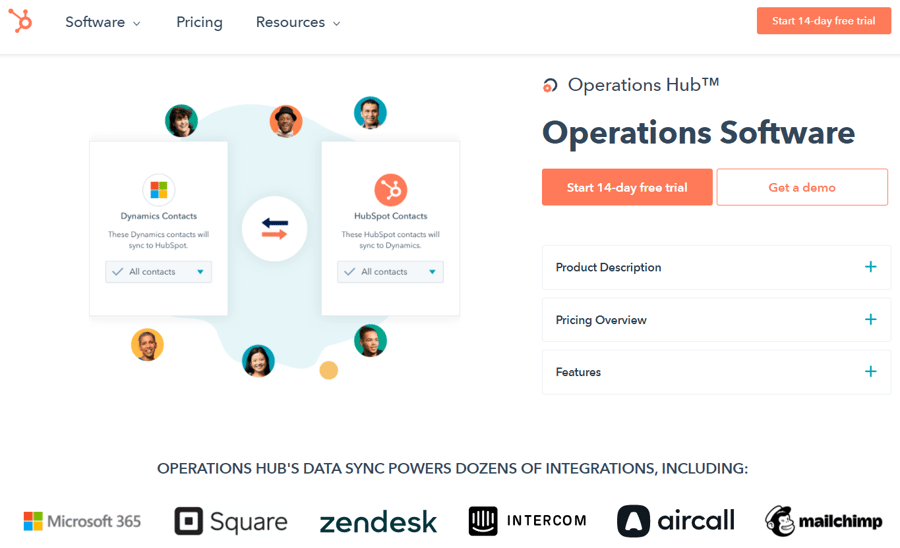 Piesync is a platform that’s garnered praise for its highly specific form of software integration. Rather than following the grab-bag approach of other Zapier alternatives, it concentrates on synchronizing data between two apps. HubSpot purchased PieSync in 2019 and integrated it into a brand-new solution called Operations Hub. It still lives on as the bundle’s data sync feature.

This feature connects HubSpot’s CRM with an array of apps and collects data from all of them in one place. Virtual businesses with storefronts in multiple online marketplaces can benefit from linking them with their main eCommerce platform. On top of that, you can customize integrations between dozens of popular apps. It’s all the convenience of HubSpot mixed with the excellent software of PieSync.

Pricing: Operations Hub is its own distinct HubSpot product, and you don’t need to own any other solution to enjoy it. The data sync feature is available for free. With that said, the $45/mo Starter plan increases your abilities and the $720/mo Professional plan boasts more automation features.

There is certainly much to appreciate about Zapier, but it does not run a monopoly. Plenty of other platforms tackle the challenge of software integration in their own way. Before settling for the biggest fish in the pond, it’s worth casting your net around and seeing what else you find.

The seven platforms on this list are among our favorite Zapier alternatives. With that said, they are also just a few of the dozens of Zapier alternatives available to online merchants. As you start an eCommerce business, we would advise exploring a myriad of options and assessing which ones are best for your purposes. As you search, feel free use this article as a reference.